WASHINGTON – The Federal Reserve took several aggressive steps Monday to support an economy ravaged by the effects of the coronavirus. The amount of money involved is huge, and the Fed’s ambitions are vast: It wants to make loans available to companies and governments so they can pay bills and potentially avoid layoffs. It also committed to buy as much government debt and mortgage-backed securities it deems necessary to ensure those markets will function.

Here are some questions and answers about the Fed’s actions:

What is the Fed trying to do here?

Fed chair Jerome Powell and other Fed policymakers know that many of their conventional tools, such as interest rate cuts, will only have a limited impact given the unprecedented nature of the current economic standstill. Cheaper credit won’t make people seek loans when they are staying at home.

But they are focused on keeping financial markets operating because, otherwise, companies large and small won’t be able to get loans to help tide them over until the crisis ends. That would force even more layoffs and business shutdowns and make the economic consequences of the viral outbreak even worse.

“Keeping the financial plumbing in order makes it easier for corporations to get credit, and therefore keep paying their bills, including payroll,” said Ernie Tedeschi, policy economist at Evercore ISI, an investment adviser.

Is the Fed providing loans directly to companies?

For larger firms, yes. The Fed said that it would lend directly to higher-rated large companies, without providing many details, though it excluded companies that directly benefit from government aid, such as airlines. The Fed also says it will purchase corporate debt, which means large companies can borrow more money by issuing new bonds, now that there is someone who will buy them. Since the viral outbreak spread earlier this month, few if any companies have been able to sell new bonds.

Last week, the Fed also said it would buy short-term corporate IOUs, known as commercial paper, that large companies also use to meet payrolls. The Fed is legally barred from lending to businesses and households, but in emergencies can act through separate legal entities that it sets up. The Fed capped its bond purchases and loans at $200 billion. 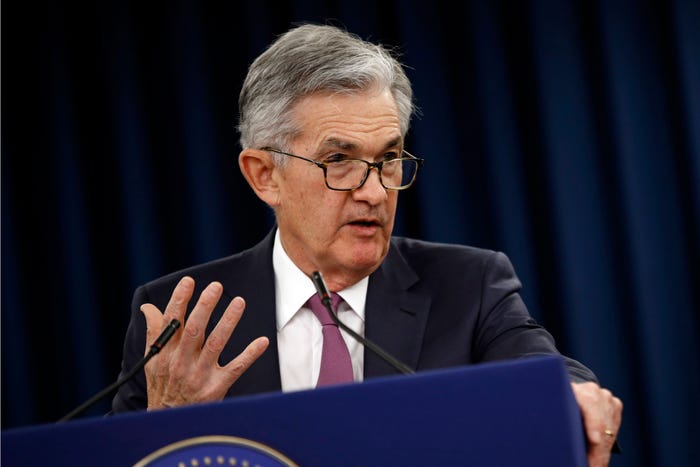 FILE - In this Wednesday, May 1, 2019, file photo, Federal Reserve Board Chair Jerome Powell speaks at a news conference following a two-day meeting of the Federal Open Market Committee, in Washington. Powell says a sharp rise in corporate debt is being closely monitored but currently the Fed does not see the types of threats that triggered the 2008 financial crisis. (Photo: Patrick Semansky, AP)

What about small businesses and consumers?

The Fed made some key moves for them, as well. It has revived a program from the financial crisis in 2008 that will buy what’s called “asset-backed securities.” Those are simply multiple loans bundled together and sold as bonds. Buying the bonds will give banks cash to make loans to consumers.

The Fed will buy bonds that are backed by auto loans, credit card loans, student loans and some small-business loans guaranteed by the Small Business Administration. Many of those lending markets have frozen up because no one will buy those securities, so the Fed’s move should get lending flowing to consumers and some small companies again. This facility will be more important when the virus-induced shutdown starts to ease and people venture out to buy cars and other large goods. This program is also capped at $100 billion, for now.

Well, the Fed also announced Monday that it would soon set up the “Main Street Business Lending Program,” but it did not provide much information about the timing. Joe Brusuelas, chief economist at RSM, predicts that it will offer a very low interest rate, such as 2.25%, over five years with quarterly payments. This program would work with the rescue package that is currently under consideration by Congress. That legislation includes $425 billion to fund Fed lending efforts like the Main Street program. Michael Feroli, an economist at JPMorgan Chase, said that amount of money from Congress could support up to $4 trillion of lending by the Fed.

How much is the Fed spending on bonds?

The central bank essentially said Monday that there is no limit to what it will buy. For now, the New York Federal Reserve – which conducts the Fed’s purchases on Wall Street – says it will buy $325 billion in Treasury bonds and $250 billion in mortgage-backed securities just this week. For context, that is a far faster pace than the bond purchases it conducted from 2008-14, when it bought trillions in bonds to keep interest rates low. In the third round of those purchases, from 2012 through 2014, it purchased just $45 billion a month of Treasurys.

Why are they buying so much?

The purchases are mostly intended to pump cash into the financial system. With companies and state and local governments facing plunging revenues from customers and taxpayers, they are trying to borrow much more.

The intensifying need for dollars means that banks and other investors are seeking to rapidly unload Treasurys, short-term corporate debt, municipal bonds and other securities. The Fed’s move to intervene as a buyer of last resort is intended to supply that needed cash.

The Treasury market is also key because the yields on Treasury notes influence a host of other borrowing costs, including for mortgages and credit cards. If investors have trouble selling Treasurys, that pushes up the interest rate on those securities, which then makes borrowing more expensive across the economy. The Fed’s purchases help keep Treasury rates low.

Where is the Fed getting the money for all this lending and purchasing?

The Fed, like all central banks, can simply create it, or as it was called in predigital days, “print money.” But since the Fed, like all banks, tries to avoid losing money on loans, the Treasury Department is providing it with $30 billion in cash to cover losses of up to 10% on the $300 billion in lending they announced Monday. The $30 billion is the only money – for now – that comes from taxpayers.

Is all the money creation going to spur inflation?

Probably not. There have been a whole host of forces holding down inflation in the world’s advanced economies, including online shopping, which makes it harder for stores to raise prices because shoppers can easily find cheaper alternatives. The availability of cheaper items from overseas and an aging population that buys fewer cars, homes and other goods also have kept prices in check. Before the virus, the Fed’s biggest problem was that it couldn’t get inflation to even reach its target of 2%, according to its preferred measure.

“For inflation to pick up we would need to see economic activity rebound very sharply,” Feroli said. “While the Fed’s actions may help limit the financial damage from the current health crisis, they are unlikely to generate an overly-vigorous recovery.”

Some economists worried that the Fed’s asset purchases after the 2008-09 recession would set off inflation, but they turned out to be incorrect.

How will this affect our national debt?

The Fed’s actions won’t make much difference. The $30 billion that the Treasury is contributing is the only taxpayer money involved. However, the $2 trillion economic rescue package being negotiated by Congress? That will send this year’s deficit skyrocketing.