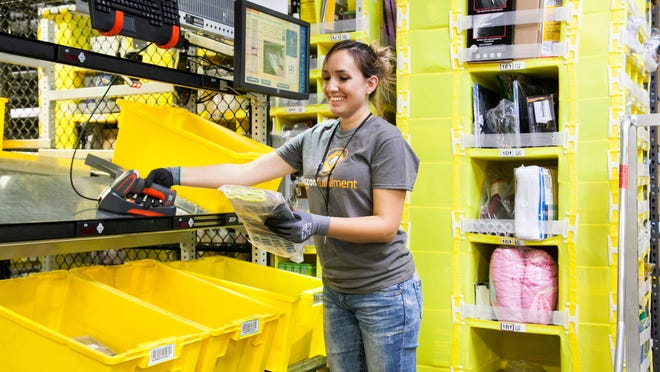 Amazon employees at a New York City warehouse are planning to walk off the job Monday, as a growing number of delivery and warehouse workers demand better pay and protections in the midst of the COVID-19 pandemic.

Employees at the Amazon fulfillment center in Staten Island will strike until the building is sanitized in the wake of several workers testing positive for the coronavirus, says Chris Smalls, a manager assistant who is coordinating the walkout.

"We're not returning to work until they close the building down,'' says Smalls, adding that roughly 5,000 workers work at the building during the course of a week. "They know at lunch time, when they clock out, do not return.''

The warehouse walk out is not the only one planned for Monday. More than 150,000 drivers and shoppers for the online grocery service Instacart are planning a national strike they say will continue until the company offers an additional $5 per order in hazard pay, the provision of supplies like cleansing wipes, and expanded pay for those affected by the coronavirus.

Deliveries are up, and so are workers concerns

The demand for delivery has escalated amid a pandemic that has shuttered stores and led to tens of millions of Americans hunkering down at home. But it's also focused a spotlight on the conditions faced by workers who are filling orders, sorting boxes and dropping off packages virtually around the clock.

Smalls says that at least five workers at his Staten Island warehouse have tested positive for COVID-19. He adds that he's withdrawn money from his 401(k) retirement fund to make ends meet because he's taken off from work because of his concerns about the cleanliness of the facility and cannot get paid leave.

"If you don't come in because you choose to be safe with your family, they're not paying us,'' said Smalls, adding that in addition to wanting the center cleaned and closed, the employees want to be paid for the time they are unable to report to work.

There have been reports of other Amazon workers becoming ill at fulfillment and distribution centers across the country, according to Athena, a coalition of groups that represent Amazon workers and others concerned about the company's influence.

But the organization says it believes only employees working at a center in Shepherdsville, Kentucky are receiving full pay while the facility is closed indefinitely.

“There are Amazon facilities all over the country ... that risk becoming transmission vectors for entire regions,'' Dania Rajendra, Athena's director, said in a statement regarding the longer-term shutdown of the Kentucky center. "Everyone ...needs to see Amazon’s comprehensive, long-term plan to close and clean contaminated facilities that addresses the urgency of this pandemic and ensures workers are paid for the work they miss.”

Amazon did not immediately respond to a request for comment on the planned walk out in Staten Island. But in a blog post on March 24, the company said it was talking with health officials and medical experts to figure out how to best deal with its facilities when a worker tests positive for COVID-19.

"Our process evaluates where the employee was in the building, for how long, how much time has passed since they were onsite, and who they interacted with, among other items, in determining whether we need to close,'' the blog said.

Anyone who has been infected or who has been told to go into quarantine can get up to 14 days of pay while they stay home, Amazon says. And employees who were in close contact with a colleague diagnosed with the virus will be paid as they self quarantine for 14 days.

Amazon says that it is also encouraging workers "to log out of their system to wash their hands whenever they choose, which has no impact on their performance."

Instacart also announced new safeguards for its employees on the eve of a planned nationwide strike.

The Instacart Shoppers and Gig Workers Collective wrote in a post Friday on the online site Medium that "Instacart has refused to act proactively in the interests of its shoppers, customers, and public health, so we are forced to take matters into our own hands.''

But on Sunday, the grocery delivery company said it would distribute health and safety supplies to its full-service workers. It's also launching a new setting to help shoppers earn higher, more consistent tips.

COVID-19:Can your boss make you come to work during coronavirus outbreak?

Instacart says it has commissioned a third-party to manufacture hand sanitizer for its employees, and it announced last week that it plans to offer workers a bonus. The company previously rolled out retroactive sick pay for in-store shoppers.

"We’ve been evaluating the COVID-19 crisis minute-by-minute to provide real-time support for Instacart shoppers and customers throughout North America," the company said in a press release.