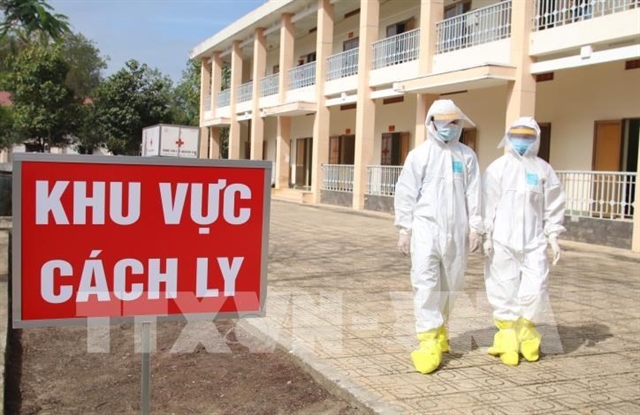 HCM CITY — A Vietnamese man who had close contact with a relative from Hải Dương Province has tested positive for SARS-CoV-2 after arriving in HCM City on a flight from Hà Nội on January 28.

The man, who has been taken to Củ Chi Field Hospital for quarantine, has a cough, headache, and loss of smell. Health department authorities described him as a “young man” and did not disclose his age.

The man, who lives in Hải Dương Province, arrived in HCM City on VN123 flight from Hà Nội’s Nội Bài airport and booked a room at Như Quỳnh Hotel in District 11. The man was planning to attend a wedding in neighbouring Đồng Nai Province.

After hearing about his cousin in Hải Dương who was diagnosed with COVID-19 and with whom he had close contact, the man immediately visited the HCM City Centre for Diseases Control and Prevention to make a medical declaration.

He was then taken to District 11 Hospital in the city for quarantine where he tested positive for SARS-CoV-2.

Prior to being quarantined, he had travelled to his hotel by taxi and visited the 46A food store on Thuận Kiều Street in District 5.

City health officials have put 16 people in quarantine, including four people who had close contact with the man and 12 guests who were staying at Như Quỳnh Hotel.

Twelve of the 16 people tested negative for SARS-CoV-2 on their first test.

Authorities have also identified 27 people sitting within five rows of seats around the man on his flight from Hà Nội.

Two of them have not replied to health officials’ calls. Nine others have been taken to other provinces for quarantine, and the remaining 16 have been isolated in HCM City and tested. Twelve of the 16 people tested negative for SARS-CoV-2, and four are waiting for test results.

The flight’s crew members have also been isolated and tested, and are waiting for test results.

Health officials have been working with local authorities to carry out preventive measures at Như Quỳnh Hotel in HCM City and neighbouring areas.

In a related case, the Mekong Delta province of Đồng Tháp, a lecturer at Đồng Tháp University on January 30 began his quarantine after discovering he had been on the same flight with the man.

The lecturer was tested and is waiting for the results, expected on January 31. The lecturer had contact with 17 other people after the flight. Authorities have told the university to suspend operations.

On January 28, the HCM City health sector increased the quarantine period from 14 days to 21 days for people who have had close contact with COVID-19 patients or for people arriving from Hải Dương and Quảng Ninh provinces, where a recent outbreak of locally transmitted cases has occurred.

Võ Văn Hoan, vice chairman of the city People’s Committee, said that festivals and programmes to celebrate Tết (lunar New Year) and the ongoing 13th National Party Congress will be held but the number of attendees will be limited.

Attendees will have to comply with preventive measures against COVID-19, he said at a meeting held on January 30.

He noted that the risk of an outbreak is high, so agencies, local authorities and all residents should take preventive measures.

Nguyễn Tấn Bỉnh, head of the city Department of Health, said that the city would test people returning from Hải Dương and Quảng Ninh provinces.

Anyone arriving from Hải Dương Province’s Chí Linh City since January 1 and from Quảng Ninh Province since January 5 will be tested.

If 50 per cent of them stay in the city, the city would have 3,000-5,000 cases for quarantine. Because of this, the department has instructed districts to open more quarantine sites.

The tourism department has sent the list of names to the Department of Health and district authorities for proper preventive measures.

Because of the COVID-19 outbreak, many universities in Hà Nội and HCM City have delayed examinations and allowed their students to take an early Tết holiday.

Several universities, such as University of Languages & International Studies under Việt Nam National University in Hà Nội, are teaching online.

Many universities have also prepared rooms at dormitories for students who are coming from COVID-19-hit provinces and cannot return for the Tết holiday. VNS