The owner of the Colonial Pipeline said Wednesday that it has begun to restart operations after having to shut off the conduit following a cyberattack last week.

Colonial Pipeline Co. said it initiated the restart of pipeline operations around 5 p.m. ET, but said “it will take several days for the product delivery supply chain to return to normal.”

The shut-off of the pipeline, the primary fuel conduit serving the East Coast, spurred gasoline shortages in the southeastern and mid-Atlantic states.

Gas prices jumped just above $3 a gallon Wednesday, and many gas stations in the Southeast were out of fuel as panicking motorists rushed to fill up in the wake of the cyberattack on a crucial regional pipeline.

The national average price for gas is up 8 cents from the week ago to $3.01, according to the latest figures from AAA. That marks the first time national prices have topped $3 since 2014.

Operators of the Colonial Pipeline, a major system that delivers fuel across the East Coast, restarted operations Wednesday evening, but said “it will take several days for the product delivery supply chain to return to normal” and fully replenish supplies. Colonial Pipeline Co. had to shut it down Saturday following a ransomware attack.

Following the shutdown, motorists have flocked to stations to top off their tanks, fearing shortages, even though pipeline officials have said they expect to “substantially” restore service by the end of the week, likely limiting most of the fallout.

The impact is largely concentrated in the Southeast, with station outages occurring throughout the region.

“People are filling up at a breakneck pace,” said Patrick De Haan, head of petroleum analysis at fuel-savings app GasBuddy, which tracks prices and shortages. “There’s just no way that stations can stay anywhere near caught up.”

And neither could GasBuddy, which went offline Wednesday as a record number of users swarmed the site to get information about service stations and prices.

Save better, spend better: Money tips and advice delivered right to your inbox. Sign up for free here

‘Do not fill plastics bags with gasoline’:US Consumer Product Safety Commission weighs in on gas shortage in Southeast

In metro Charlotte, North Carolina, for example, 71% of stations were out of gas as of Wednesday morning, according to GasBuddy. In the Atlanta area, it was about 59%.

Genevieve Scott, an essential healthcare worker in Charlotte, drove around town looking for gas at 5 a.m. before heading to work.

“I went to four stations,” Scott said. “Three had no gas as indicated by bags on their pumps or paper signs. One station had gas and was swarmed with over 30 cars –before 6 a.m.”

The governors of Florida, North Carolina and Virginia have declared states of emergency to make sure there are enough supplies of fuel.

The move will help “prepare for any potential motor vehicle fuel supply interruptions across the state and ensure motorists are able to have access to fuel,” North Carolina Governor Roy Cooper said in a statement.

‘It’s really frustrating’:Worker shortages are putting more money in employees pockets but could slow the economy 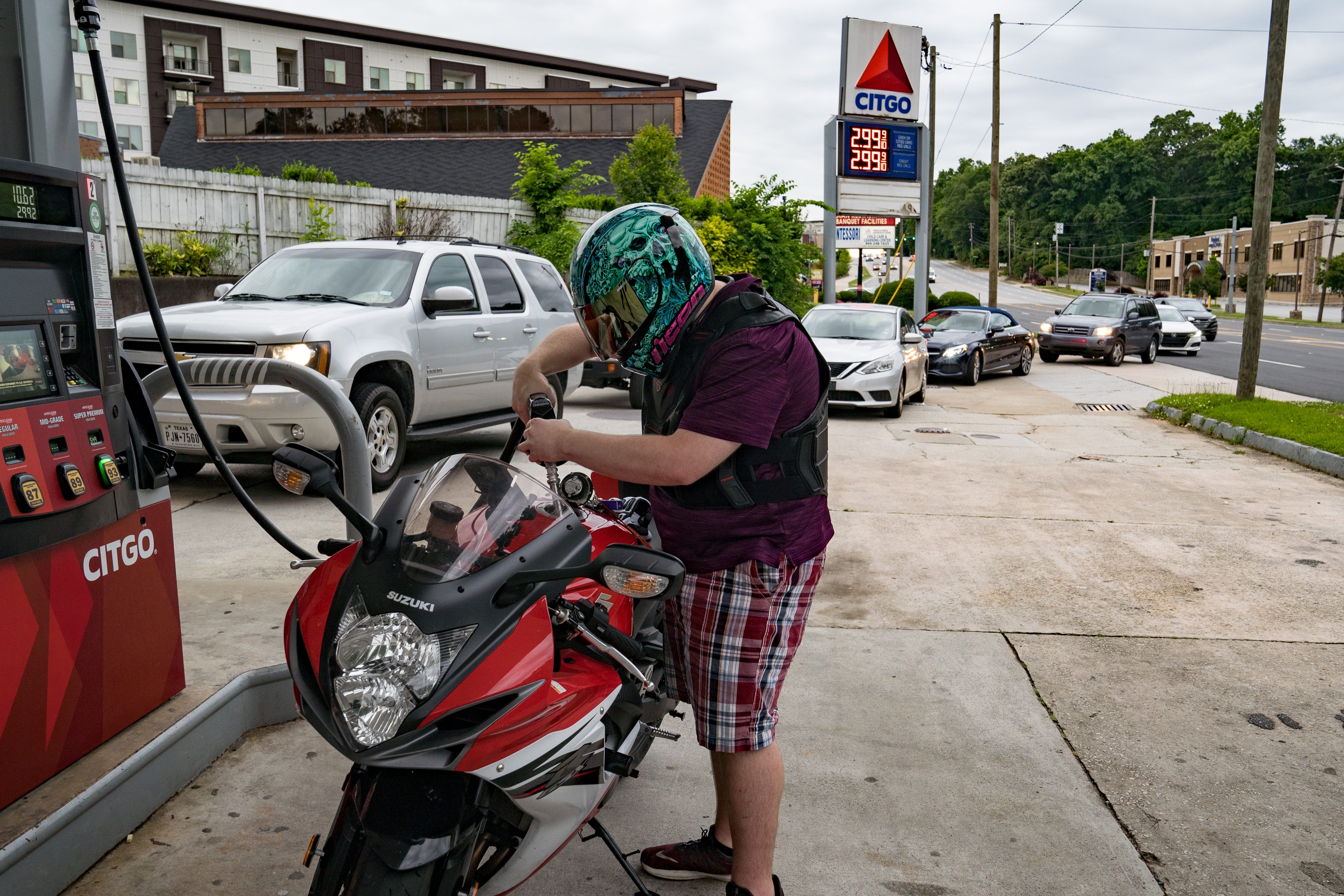 Demand for gas Tuesday was up more than 14% compared with the same day a week ago, DeHaan said.

Why are there shortages?

Panic buying is exacerbating the issue. In fact, while the Colonial Pipeline’s downtime is making it difficult to get fuel to the region, the real issue might be a lack of truck drivers to transport fuel from large regional holding tanks to local stations because people are filling up so fast, DeHaan said.

“People are pumping at far, far faster than trucks can deliver it,” DeHaan said.

Bloomberg reports the Biden administration may consider waiving the Jones Act, passed in 1920, to allow foreign tankers to transport gasoline and diesel fuel.

Here’s what else you need to know:

Gas shortages: What parts of the East Coast could feel one?

The Colonial Pipeline system delivers about 45% of the fuel for the East Coast, including gasoline and jet fuel. It runs more than 5,500 miles from Texas to New Jersey.

States like Georgia, South Carolina, North Carolina and Virginia are especially vulnerable because they have limited options in terms of fuel transportation alternatives. Gulf Coast states can rely more easily on shipments from tankers.

How many stations are out of gas?

The situation is the worst in North Carolina, where about 28% of stations were out as of late Wednesday according to GasBuddy. About 18% of stations in Georgia, and 17% in Virginia were out, while 16% in South Carolina, 5% in Florida, 4% in Maryland, 4% in Tennessee and 2% in Alabama were down.

At a Citi Stop station in Asheville, North Carolina, employee Jessica Alcocer said the store ran out of gas on Monday afternoon.

How will this impact air travel?

Passengers flying to Honolulu will have to change planes in Dallas, and those heading to London will stop in Boston to refuel.

Southwest and United flights carried extra fuel on flights to Nashville, Tennessee, Baltimore and some other airports in case jet fuel was unavailable at those airports. Normally airlines load only enough fuel for a single flight, because topping off adds to the plane’s weight and hurts mileage. Most planes can carry enough fuel for a round trip, but the extra fuel burn costs money.

How did this happen?

We’re not exactly sure yet.

The FBI has said that an online gang known as DarkSide struck the Colonial Pipeline system with a ransomware attack, which takes computerized systems hostage until a payment is made.

“We continue to work with the company and our government partners on the investigation,” the FBI said.

Could a hack happen again?

Yes. The episode illustrates how vulnerable the nation’s energy infrastructure is to infiltration.

Oil Price Information Service analyst Tom Kloza says it’s a “wakeup call” for the energy industry, adding “Imagine if it was one of the power companies.”

Should you fuel up now?

Only if you have to.

DeHaan urged drivers not to panic in states along the Gulf and southeastern Atlantic coasts.

Don’t “go out and hoard gasoline and make the problem much worse,” he said.

How can I find gas near me?

The GasBuddy app features a fuel availability tracker which tells users which stations have no gas, no fuel or no power. The tracker is crowdsourced, and motorists are encouraged to report local stations out of gas or fuel.

How can I preserve gas in my tank?

Here are some tips to consider.

How can I store gas safely?

If you plan on buying gas to keep in reserve, here are some tips on storing it safely, according to ExxonMobil: