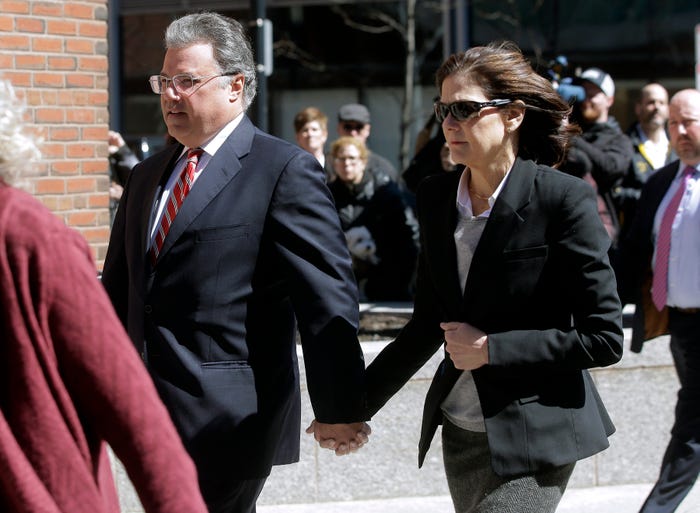 BOSTON — Even during a global pandemic, the blockbuster "Varsity Blues" college admissions case goes on.

In an unprecedented move to follow new social distancing requirements, Elizabeth Henriquez was sentenced Tuesday during a Zoom video conference call to seven months in prison for paying more than $500,000 in bribes to help get her two daughters admitted into prestigious universities.

It was the second longest prison term among 16 parents so far sentenced in the admissions scandal. The longest, nine months, went to former Pimco CEO Douglas Hodge.

Henriquez appeared before U.S. District Judge Nathaniel Gorton by video from her home in California in what may become a model for how future hearings in the case could take place.

Her attorney, Aaron Katz, asked Gorton to spare her prison because of a preexisting health condition. He said it wouldn't be safe for the 57-year-old to live in prison amid theCOVID-19 outbreak and recommended home detention instead.

Gorton said he was “cognizant we are in an unprecedented situation and of the defendant's condition" but would "not forfeit the obligation of a federal judge that is warranted by the defendant’s conduct."

“This sentence needs to not only deter you from doing something like this again but anyone else who has the gall to use his or her wealth" to undermine higher education, Gorton said. He called her actions an “excusable crime of greed, hubris and flaunting of wealth."

College admissions scandal tracker: Who's pleaded guilty, who's gone to prison — and who's still fighting

Get daily coronavirus updates in your inbox: Sign up for our newsletter now.

The judge ordered Henriquez to report to prison June 30. If the coronavirus outbreak doesn't improve by then, Gorton said he would entertain a motion to reconsider the sentence. Henriquez also was ordered to serve two years of home supervision upon release, pay a $200,000 fine and perform 500 hours of community service.

All the parties, including the judge, federal prospectors and defense attorneys also communicated by video from their homes. Video panels were positioned inside the Boston federal courtroom, but the public and reporters could listen remotely by telephone. Dozens tuned in. Any recording of the proceedings – audio and video – were prohibited as is the case for all federal court hearings.

More: As college admissions scandal turns 1, a look at the tough judge Lori Loughlin, other parents will face

Technical issues kicked things off as parties adapted to the new format.

“I don’t see her on my screen here," Gorton said.

"I had to un-mute, you honor. I'm sorry," Henriquez replied.

Elizabeth and her husband Manuel Henriquez, former chairman and CEO of the lending company Hercules Capital, pleaded guilty in October to fraud and money laundering charges. They admitted paying nearly $50,000 to Rick Singer, the mastermind of a nationwide admissions scheme, to cheat five times on college entrance exams, the most of any defendant: twice for their oldest daughter and three times for their youngest daughter.

The Henriquezes, residents of Atherton, California near San Francisco, also paid $400,000 to Singer to have former Georgetown University tennis coach Gordon Ernst accept their oldest daughter onto the team to get her admitted into the university.

In addition, Manuel Henriquez agreed to use to his status as a prominent alumni of Northeastern University in Boston to advocate for the admissions of other students of Singer, a college consultant. His sentencing is set for April 8.

“There is no dispute about the facts, The numbers are remarkable," Assistant U.S. Attorney Eric Rosen said. "This was a longtime scheme where fraud replaced truth for both of her kids.”

On two other occasions in the admissions case, Gorton reduced sentence lengths for parents because of strong records of community service. Rosen said Henriquez should receive a longer prison term because she lacked such a record.

Addressing the judge, Elizabeth Henriquez said but for the "extraordinary times" she would have preferred to express her "deep remorse" in person.

"I know my words won’t make up for my crimes but I still want to apologize for my family, friends and my community and those other students I’ve hurt with my actions. I feel so ashamed," she said, tearing up.

“It has been painful to know that I failed as a mother, and on a more basic level, as a human being. I should have allowed them to find their own way, knowing if they failed, that failure would lead to growth. Instead I cheated."

Katz told the judge for the past 20 years "motherhood is what defined Elizabeth." He said she was "motivated by the desperate, misguided desire to shield her daughters from failure.” She lost her "moral compass," he said, adding it will "haunt her for the rest of her life.”

Katz argued Henriquez's sentence should be shorter than Hodge's nine months because he cheated for four children while she cheated for two. Katz singled out the five months of prison received by Hot Pocket heiress Michelle Janavs as reasonable if not for the health issues posed by the coronavirus.

"It is entirely conceivable that federal prison will not be a safe place for Elizabeth Henriquez until there’s a vaccine, which would be eight to 12 months," Katz said. “Elizabeth is not a movie star, titan of industry or an heiress. She's a mother standing before you broke, scared and exhausted. She is pleading for your mercy.”

The Henriquezes' cheating began in 2015 when the the couple paid Singer $2,500 to have a proctor provide their oldest daughter with answers to some of the questions on her SAT II subject tests.

Four months later, they paid Singer $25,000 to have Mark Riddell, a counselor from a Florida private high school, fly to San Francisco where he provided answers for the same daughter during the SAT exam. The oldest daughter eventually attended Georgetown as a fake tennis recruit

The couple later twice paid Singer to have Riddell cheat on their younger daughter's ACT exam, as well as once on the SAT subject tests.

For the first ACT administration, Singer initially billed the Henriquezes $75,000, but Manuel Henriquez later agreed to use his influence at Northeastern to help secure the admission of the child of another Singer client, whose parents paid Singer $250,000.

The fraudulent test scores were eventually submitted to Northwestern University in Chicago, where the daughter was admitted.

Thirty-two out of 53 defendants charged in the college admissions scandal have pleaded guilty since the scandal broke nearly one year ago. Two college coaches, along with the parents, have received sentences for their crimes.

A separate group of 14 parents, including actress Lori Loughlin, are fighting charges and could face trial as soon as October.