Businesses continue to encroach on pavements in Hà Nội 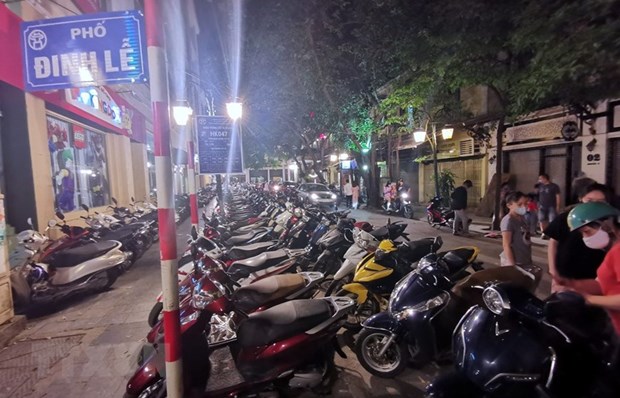 Roadside businesses in Hà Nội continue to encroach on the pavements, by either setting up tables and chairs or allowing vehicles to park. VNA/VNS Photo

HÀ NỘI Many roadside businesses in Hà Nội continue to illegally spread out onto pavements during the COVID-19 pandemic.

Most of the violations were being made by tea shops, restaurants and bia hơi (draught beer) venues.

Owners of street restaurants and stalls would set out tables and chairs on the sidewalk to accommodate more customers. Others were using the outside space as the temperatures in the city were rising, and guests enjoyed getting some fresh air.

Pedestrians were forced to walk on the road to avoid the large number of customers sitting on the pavement outside the business.

The crackdown on pavement encroachment by local authorities has proved inefficient. After officials left the area following an inspection, the tables and chairs were placed back outside, a man living on the city’s Tôn Thất Tùng Street said.

A number of shops and stalls were also placing signs and even parking cars on the sidewalks, Nguyễn Kim Tú on Hai Bà Trưng Street said.

He said: “People need to run their small business to make a living, especially the tea shops on the sidewalk, but if they do business, they must comply with the regulations of the Government.”

Hoàn Kiếm District People’s Committee proposed to the city authorities to allow businesses to use the pavements along five streets during a fixed time period.

However, the proposal was rejected by the city’s Department of Transport because it did not comply with the current law, especially the provisions on the use of pavements not for traffic purposes.

In fact, the streets mentioned in the above proposal were the main traffic axis of the area, with a large amount of traffic, especially during peak hours.

“If we allow people to open sidewalk restaurants, we will create conditions for vehicles to stop illegally, leading to the risk of traffic congestion and affecting neighbouring areas,” said Tú.

The licensing of sidewalk use for businesses will cause inequality and disputes between households, where many families live alongside the stalls and shops, causing discontent among local residents.

Ngô Mạnh Tuấn, Deputy Director of the city’s Department of Transport, said that if there was a real need for business, the Hoàn Kiếm District People’s Committee could petition the city’s People’s Committee to consider temporary pavement use with eligibility conditions (having a suitable sidewalk area).

“The city’s forces continue to make unexpected inspections at areas, focusing on the sidewalks, strictly handling encroachments and cars stopping on the roadside,” Tuấn said. VNS