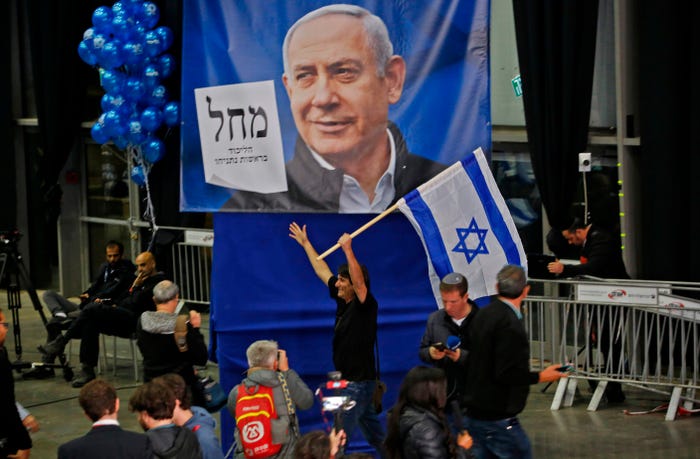 A man waves an Israeli flag in front of a giant Likud Party election poster of Prime Minister Benjamin Netanyahu at the Likud's electoral headquarters in the coastal city of Tel Aviv on March 2 after polls closed. (Photo: GIL COHEN-MAGEN, AFP via Getty Images)

JERUSALEM – Israeli Prime Minister Benjamin Netanyahu's Likud Party won the most votes Monday in the country's third election in 12 months, partial results showed, although it was not clear if it will be enough to break the nation's political deadlock.

With more than three-quarters of the votes counted, Netanyahu appeared a few seats short of a majority in Israel’s parliament. Netanyahu needs 61 seats out of 120 to form a government – possible if he enters into an alliance with religious and nationalist parties.

Full results are due Tuesday.

Coalition governments are a mainstay of Israeli politics.

Netanyahu is fighting for his political survival after being charged in November with bribery, fraud and breach of trust in connection with three separate cases. He denied any wrongdoing and called the prosecution a "witch hunt."

Netanyahu tweeted the word "Thanks," along with a heart emoji.

"What a joyous night," Netanyahu later told a crowd of supporters in a speech at Likud’s election headquarters in Tel Aviv. "This victory is especially sweet, because it is a victory against all odds ... We turned lemons into lemonade."

His main challenger, Benny Gantz from the centrist Blue and White Party, is a retired military chief who said Netanyahu is unfit for office because of the charges.

"I will tell you honestly, I understand and share the feeling of disappointment and pain because it is not the result we wanted," he said, late Monday.

The Arab Joint List party, comprised of Arab Israelis, emerged as the third-largest party, according to exit polls and the votes already counted.

After the official results come in, attention will shift to President Reuven Rivlin who is responsible for choosing a candidate for prime minister. He is supposed to select the leader who has the best chance of putting together a stable coalition.

The honor usually goes to the head of the largest party, but equally important is the number of lawmakers other than a party's leader who recommend him or her to the president. Rivlin’s selection will have up to six weeks to form a coalition.

If that fails, another candidate will have 28 days to form an alternative coalition.

If that effort fails, new elections would be held.

"This is usually a holiday, but to be honest, I have no festivity in me, just a sense of deep shame before you, the citizens of Israel," Rivlin said as he cast his ballot Monday. "We don’t deserve this. We don’t deserve another horrible and filthy campaign like the one that ends today, and we don’t deserve this endless instability. We deserve a government that will work for us."

Turnout was projected to be the highest since 1999 – more than 70% of registered voters cast ballots, according to Israel's Central Elections Committee. 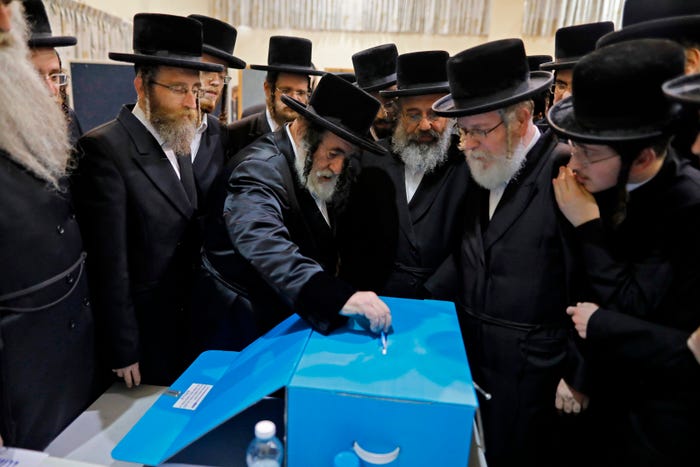 Before the first two votes in April and September last year, Netanyahu's leadership credentials were buoyed by President Donald Trump's pro-Israel actions that include moving the U.S. Embassy from Tel Aviv to Jerusalem, which Palestinians claim as part of their future capital; recognizing the Golan Heights as belonging to Israel instead of Syria, in defiance of international law; and pulling out of the 2015 Iran nuclear deal with world powers, an accord that Israel, Iran's sworn enemy, opposed.

In January, the Trump administration released its plan for peace between Israelis and Palestinians. The plan, which Palestinians rejected even before its release because of its perceived pro-Israel slant, calls for Israel to be able to annex Israeli settlements built on West Bank land claimed by Palestinians.

There was a new complication for Monday's vote.

Election authorities created several polling stations for the more than 5,000 eligible voters under quarantine for the coronavirus. Hundreds of voters arrived at the stations wearing face masks and gloves. Election officials sat behind a clear plastic curtain.

"The corona thing is completely under control. Today, we’ve taken all the precautions that are necessary. People can go and vote with complete confidence," Netanyahu said after casting his ballot in Jerusalem.

Some attempted to lighten the national mood.

Eretz Nehederet, the Israeli equivalent of "Saturday Night Live," urged Israelis to send selfies of themselves voting to the television show, to be included in an Instagram roundup. Families took advantage of the rare nonreligious legal holiday to vote, then shop. To encourage commerce and promote some fun, the Jerusalem municipality teamed up with ice cream parlors to offer a free ice cream to anyone who spent 20 shekels – about $6 – in a store and brought a receipt.

Palmer hopes the next government will negotiate with the Palestinians.

“Peace would be nice, though I don’t know what that means practically,” she said.

Gerald Steinberg, a professor of political science at Bar Ilan University, predicted Netanyahu's trial will be "very, very slow" and if he returns as prime minister, he will seek to introduce a law that would exempt him from being tried while in office.

Nimrod Novik, an expert on Israeli political affairs at the Israel Policy Forum, a New York-based American Jewish organization, said that if the final election results match the exit polls and Netanyahu wins, he will seek to annex the West Bank.

He said extending sovereignty over the West Bank would present Israelis with a dilemma: "If we grant the Palestinians equal rights, we risk losing our identity as a Jewish state. If we don’t grant them equal rights, we lose our democracy," he said.