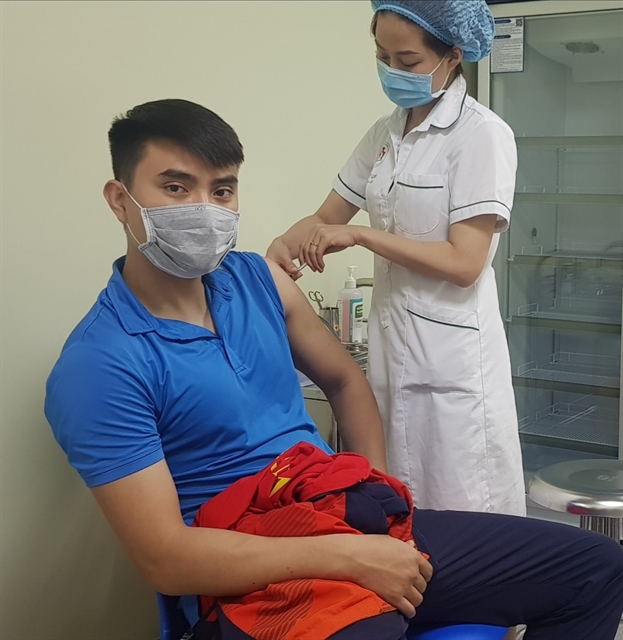 Fencer Vũ Thành An is one of the hundreds of athletes to receive COVID-19 vaccinations in preparation for their Olympic qualifiers in the coming months. VNS Photo

HÀ NỘI — The first Vietnamese athletes have received the Oxford/AstraZeneca COVID-19 vaccine in Hà Nội on Tuesday, ahead of this year’s various international tournaments.

On the first day of the inoculation programme for athletes, wrestlers, taekwondo and judo martial artists and their coaches received the shots.

Next are the fencing, boxing, swimming, gymnastics and weightlifting teams that will compete for Olympics slots in the coming months.

Park Hang-seo and his national football team will also vaccines ahead of the 2022 World Cup qualifiers in June in the UAE while Hà Nội FC, Sài Gòn FC and Viettel FC players and staff will also be inoculated ahead of their participation in continental competitions.

“Tokyo Olympics qualification tournaments are ongoing until June 30 in different countries. The COVID-19 vaccine injection for athletes is to make sure that they are allowed to enter these destinations and prevent them from being infected,” said Trần Đức Phấn, deputy head of the Việt Nam Sports Administration.

“The first group will be 180 athletes and coaches who are going to compete in the Olympic qualifiers. There will be about 20 players injected per day.

“Meanwhile the other 192, including footballers, will be in the second batch later on,” he said.

“This is great support from the Government to athletes. It will help be them more comfortable in training and competing.” VNS