AstraZeneca vaccines prove safe, effective, will be delivered to Việt Nam by mid-year 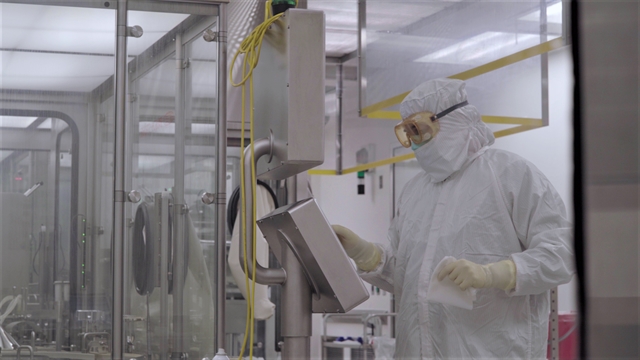 A production and manufacturing facility at AstraZeneca. Photo courtesy of the company

HCM CITY— The Ministry of Health has approved the use of COVID-19 vaccine AstraZeneca following the primary analysis of Phase III clinical trials from the UK, Brazil and South Africa, which confirmed that it is safe and effective at preventing COVID-19, with no severe cases and no hospitalisations, more than 22 days after the first dose, according to a press release from AstraZeneca Vietnam issued on February 4.

AstraZeneca Vietnam and the Vietnam Vaccine Joint Stock Company will work together to supply 30 million doses in the country, starting mid-year.

A representative from VNVC told the Sài Gòn Giải Phóng (Liberated Sài Gòn) that the company has completed negotiations on the deal with AstraZeneca – a global biopharmaceutical business from the UK.

Supply Director of VNVC Vũ Thị Thu Hà said her company has made the best preparations to receive the vaccines and give injections to residents.

The analysis result of the vaccine was published as a preprint in The Lancet.

Results demonstrated vaccine efficacy of 76 per cent after the first dose, with protection maintained to the second dose. With an inter-dose interval of 12 weeks or more, vaccine efficacy increased to 82 per cent.

The primary analysis for efficacy was based on 17,177 participants with 332 symptomatic cases from the Phase III UK, Brazil and South Africa trials led by Oxford University and AstraZeneca, a further 201 cases than previously reported.

Mene Pangalos, executive vice president of biopharmaceuticals R&D at AstraZeneca, said: “This primary analysis reconfirms that our vaccine prevents severe disease and keeps people out of hospital. In addition, extending the dosing interval not only boosts the vaccine’s efficacy, but also enables more people to be vaccinated upfront.”

Professor Andrew Pollard, chief investigator of the Oxford Vaccine Trial, and co-author of the paper, said: “These new data provide an important verification of the interim data that has helped regulators such as the MHRA in the UK and elsewhere around the world to grant the vaccine emergency use authorisation. It also helps to support the policy recommendation made by the Joint Committee on Vaccination and Immunisation for a 12-week prime-boost interval, as they look for the optimal approach to roll out, and reassures us that people are protected 22 days after a single dose of the vaccine.”

Data will continue to be analysed and shared with regulators around the world to support their ongoing rolling reviews for emergency supply or conditional approval during the health crisis.

AstraZeneca is also seeking Emergency Use Listing from the World Health Organization for an accelerated pathway to vaccine availability in low-income countries. — VNS