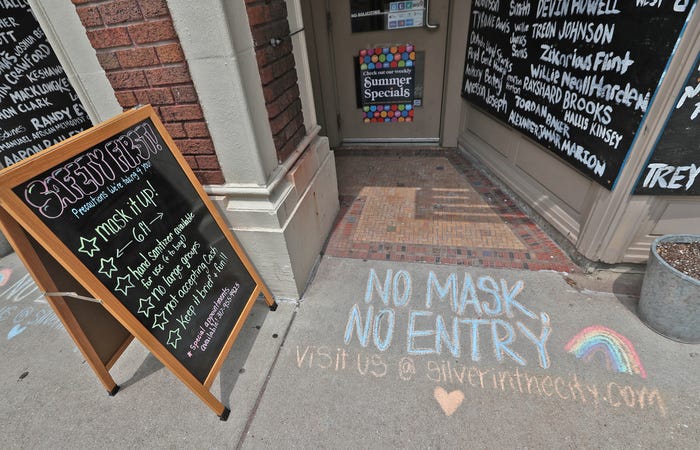 As coronavirus cases continue to surge in many states, the process of easing restrictions, then slamming them back in place could be America's new tumultuous reality – one that threatens the psyche of many, experts say.

At least 21 states have paused their plans to reopen their economies, just weeks after unveiling those measures as the nation started to emerge from strict quarantine measures and stay-at-home orders. These stops and starts can trigger feelings of frustration and fatigue and leave people feeling overwhelmed.

“This is very confusing for many people, and rightfully so,” Dr. Ogbonnaya Omenka, assistant professor of public health at Butler University, told USA TODAY.

“Initially, mixed messages defined how states and different jurisdictions were responding to this problem. With public health intervention, clear messaging, even if it’s wrong, is better than mixed messages. Because if the message is clear, you are leaving it still up to the individuals to decide whether they want to acquiesce to it or not," he said.

"But when it’s mixed, the confusion is: ‘What should I follow?’ We are reaping the fruits of those mixed messages. One thing it did was lure the public into a sense of an oversimplification of the problem.”

Conflicting messages: The White House has been unclear on wearing masks and the new coronavirus cases

The common misconception was that months of lockdown would eliminate the threat of the virus,Omenka said, even though health care experts across the country stressed that thorough hand washing, use of face coverings and social distancing would still be mandatory, even after the restrictions eased.

Phoenix Mayor Kate Gallego said Sunday on ABC's “This Week” that Arizona “opened way too early” and that when nightclubs in the state opened their doors, it “sent the signal that we had, again, defeated COVID and, obviously, that is not the case.”

Not only is the virus surging, it is infecting more people in the U.S. than ever before. At the start of June, there were 16,040 confirmed new cases of the virus, according to the Johns Hopkins University data dashboard. By July 1, that number swelled to 52,609, a record for new cases.

During a Senate committee hearing Tuesday, Dr. Anthony Fauci, director of the National Institute for Allergy and Infectious Diseases, testified that the U.S. is “going in the wrong direction” and that he “would not be surprised if we go up to 100,000 a day if this does not turn around.”

These ominous numbers have been exacerbated by pre-existing weaknesses in the country's public health system, such as racial health disparities and certain communities being underinsured or having no insurance.

Dr. Thomas File Jr., president of the Infectious Diseases Society of America, equates these problems to being “almost like a social pandemic” that can heighten the burdens and stresses placed on the most vulnerable.

Perhaps the most quintessential example of this in the U.S. has been nursing homes, where coronavirus infections have decimated populations of residents, many of whom have been instructed to remain in their rooms for months on end, without any social contact.

“The U.S. has not invested in a lot of the social protections that leave people feeling like they have a safety net,” Dr. Linda Fried, dean of the Mailman School of Public Health at Columbia University and professor of epidemiology, told USA TODAY. “And without a safety net and without a social infrastructure of connectedness and cohesion of communities, which we’ve lost a lot of, it exacerbates the sense of anxiety and fear and isolation that people have in these circumstances. It makes it all a lot worse.”

Experts argue, however, that there are opportunities for those who may be feeling overwhelmed by the see-sawing of restrictions and unrelenting nature of the virus to feel that they have tools to take greater control over the health of their communities. The caveat, though, is that the effort must be formed collectively.

“I think people should feel empowered,” said Dr. Sarah Fortune, chair of the Department of Immunology and Infectious Diseases at Harvard’s T.H. Chan School of Public Health. “I think people should see community responsibility as a form of community power and that, collectively, we have the ability to ensure we achieve those goals: an open economy and a healthy community. We just have to act as a community.”

Fortune said it would be a “mistake” to frame the discussion on reopening as a dichotomy between staying healthy and letting people return to work. A "basic package of risk mitigation strategies” could get society to “feel, functionally, if not normal, pretty normal” and keep economies humming, she said.

Those measures are well-known but not always enforced or utilized: the use of masks, hand washing, distancing, reduced density and a strong focus on contact tracing, testing – and surveillance testing.

“I just don’t want to be quoted as saying the ‘second wave is inevitable,’ ” Fortune said. “There’s a tendency toward a certain narrative that I don’t feel is helpful to society. Because I don’t think it is inevitable and I think that narrative almost propagates societal divisions.”

Fried said that going forward, the U.S. needs to "pandemic proof" itself with stronger infrastructure that aims to solve multiple problems. New buildings, for example, should be designed in ways to both diminish the transmission of infectious diseases and reduce greenhouse gas emissions and teleworking needs to be a priority.

“If we can start talking in a way that puts pressure on our leaders to provide the right direction, we don’t have to be the world’s example of how to do this wrong,” Fried said. “We could turn this around. But we can only turn it around together, respecting the science and knowledge and continuing to learn. This could be an opportunity to make the U.S. better, stronger.”