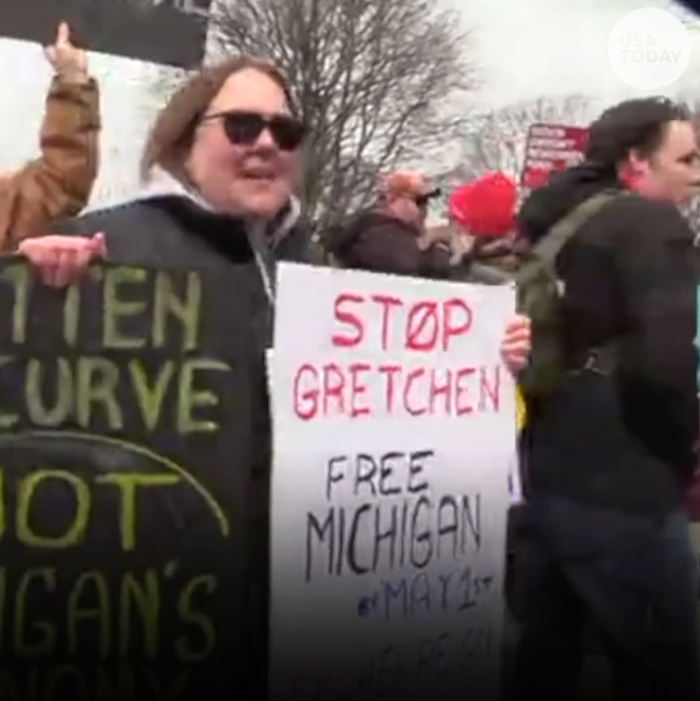 A public health crisis, an economic crash, nascent protests, and presidential pressure. And a high-stakes election whose outcome could turn on their performance.

Welcome to the perilous political life of swing state governors.

From Florida to Wisconsin, governors in both parties are walking a tightrope with increased deaths on one side and economic devastation on the other – all as President Donald Trump shakes the wire with provocative tweets and pronouncements.

“They are almost in a no-win situation,” Susan MacManus, a political scientist and professor emerita with the University of South Florida, said of governors in swing states. “They're facing the most unusual and most intensely pressured events” of a lifetime.

Take Michigan Gov. Gretchen Whitmer, a Democrat. Trump has cast her as a poster child for the nanny state, criticizing the coronavirus restrictions she has imposed and encouraging protesters who want her to reopen the state.

Michigan has been hard-hit by the pandemic – with 2,700 deaths and more than 30,000 cases as of April 21. It's also a pivotal battleground state in the 2020 presidential election that Trump narrowly won four years ago.

As thousands of demonstrators converged on Michigan's capitol last week, some showed their allegiance to the president by waving "Trump 2020 banners" and wearing red “Make America Great Again” hats.

But Whitmer has been unapologetic in pushing back against Trump, defending her strict social distancing orders and calling out protesters for ignoring public health precautions.

“We have a disproportionate problem in the state of Michigan,” Whitmer said on NBC’s “Meet the Press” on Sunday. “And that’s precisely why we have to take a more aggressive stand.”

Whitmer’s outspokenness – and her frequent national media appearances – have burnished her image among Democrats and fueled speculation that former Vice President Joe Biden may choose her as his running mate. But it’s also firing up Republicans in Michigan and making her a bigger Trump target, said David Dulio, director of the Center for Civic Engagement at Oakland University.

But Trump also has a tough political calculus to make, as he attacks Whitmer and tries to woo Michigan voters, Dulio said.

“He’s walking a similar tight rope. You can hear it at times when he’s giving his briefings. He will sometimes take a shot at the governor and in the next breath say how much he loves Michigan,” Dulio said. “It’s this dance.”

It’s not just Trump and Democratic governors engaged in this political tango.

In Florida, GOP Gov. Ron DeSantis is under pressure to deliver his state for Trump in the November election – and his handling of the coronavirus outbreak has come under intense scrutiny.

DeSantis waited until April 1 to issue a stay-at-home order, after cases of the virus hit nearly 7,000 in the state and 87 Floridians had died. And his order deemed religious services “essential,” a controversial decision that played to the GOP base in the state.

“He doesn’t want to get crosswise with freedom of religious because that is critical to his re-election and also to the president’s,” MacManus said.

Now, DeSantis faces pressure from the White House to lift the state-wide restrictions, even as Florida remains a disease hot spot."

"Trump would like to have some of the larger states, Republican swing states, get up and running – within reason," said Ron Pierce, a GOP consultant based in Tampa.

Pierce said Florida Republicans are also deeply worried about the economic consequences of the shutdown. About 1.5 million Floridians have filed unemployment claims since the crisis hit, but a poorly designed system has created a huge bottleneck in processing claims, leaving DeSantis vulnerable to attacks. That problem could also cloud Trump's prospects in Florida.

"The success of Florida, with regards to our response and reopening the state, will be directly tied to the president," Pierce said. "They're intertwined."

While other governors have seen their approval ratings skyrocket amid the pandemic, DeSantis’s ratings have slipped. His pre-pandemic approval stood at 58%, and it now stands at 51%, according to an analysis by FiveThirtyEight, a website that analyzes polls and other data.

In four national polls conducted in April that surveyed Americans’ views of Trump and their governors’ handling of the crises, respondents were much more likely to approve of their governors' responses than Trump’s.

"They’re much more on the ground, dealing with these problems, day-to-day,” said Terry Madonna, director of the Center for Politics and Public Affairs at Franklin and Marshall College in Pennsylvania. “It could be that they’re closer to the voters and therefore able to explain better to their constituents what they’re doing and why they’re doing it.”

A Washington Post-University of Maryland poll published Tuesday found that 54% of Americans disapproved of Trump's handling of the outbreak. But 72%of respondents approved of their governors response to the crisis.

Whitmer has seen a 24 percentage point boost in her public approval ratings. In Wisconsin, Democratic Gov. Tony Evers’ approval ratings have climbed from 48% before the coronavirus crisis to 72%in the most recent poll.

Charles Franklin, director of the Marquette Law School Poll, said it’s not clear yet how long these boosts will last. Evers’ latest decision – to extend Wisconsin’s stay-at-home order through May 26 – sparked criticism from Republican state legislators and threats to challenge his authority in the courts. It also fueled protests against the restrictions, with 1,000 demonstrators rallying against the move.

In a late March poll, 76% of respondents approved of Evers’ handling of the pandemic – including 60% of Republicans. But that was before people missed their end-of-March paychecks and before Evers extended the state shutdown, Franklin noted.

“The question is whether the second shutdown and some developing opposition among Republican elected officials may start to tip that balance of opinion,” he said. “What we really don't know is as people are facing a more extended disruption to their lives and their businesses and their jobs, will opinions start to change? That is the trillion-dollar question.”

Nationwide, he noted that Americans still overwhelmingly support the stay-at-home orders, with only 15% to 20% calling them an overreaction.

“That’s a small percentage … but it’s certainly enough people to provide the basis for a demonstration,” he said. Trump’s rhetoric so far has been relatively tempered, he said, with a few tweets encouraging protests against Democratic governors.

“The open question to me is how far does Trump go on this?” he said.

In Pennsylvania, Democratic Gov. Tom Wolf has tangled with GOP critics, vowing to veto a bill passed by the GOP legislature to ease restrictions, for example. But he’s maintained his signature mild-mannered style to the challenges of leading a politically divided state in the time of a pandemic.

“He has created a major contrast with President Trump,” said Democratic operative Mike Mikus, who worked on Wolf’s campaigns. He argued that Trump's uneven response to the crisis and his circus-like White House briefings will make it hard for the president to repeat his 2016 victory in Pennsylvania.

"This could be the defining issue of the election,” he said.

Ray Scheppach, former longtime executive director of the National Governors Association, said the decision governors face on when and how to loosen restrictions is a lot tougher than the call they had to make on closing down.

“There are bigger political risks,” said Scheppach, a public policy professor at the University of Virginia. “That’s why you see groups of governors getting together.”

Michigan and Wisconsin, for example, are part of a bipartisan group of Midwestern governors coordinating on reopening the economy. Similarly, Pennsylvania is coordinating with other northeastern states.

Scheppach said the working groups are also a reflection of governors' frustration with Trump and the federal government’s lack of national coordination on supplies and other issues.

“Underneath it, there’s a certain level of resentment,” he said. “They’re stronger if they can get together in groupings.”

The protests are so far not a major problem for governors, he said, because they’re fairly limited in scope.

“If it gets broader, I think it is a problem,” he said. “I think they all know that this could get much worse.”