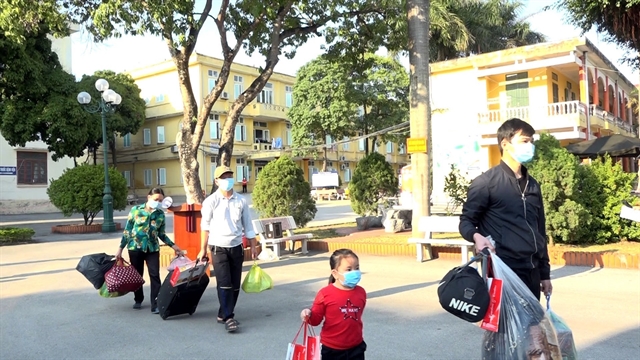 Twenty-two COVID-19 patients in Hải Dương have recovered and were released from a field hospital in the province on Thursday. VNA/VNS Photo

The boy had contact with Patient 1725 who was put in quarantine on January 31. He tested positive for COVID-19 on Wednesday and is now being treated at the National Hospital for Tropical Diseases in Đông Anh District.

Of the remaining 30 patients, 27 are from Hải Dương, two from Quảng Ninh and one from Gia Lai.

The cases from Hải Dương are linked to positive cases confirmed earlier in the province’s clusters and have been quarantined since the outbreak was detected.

The two patients in Quảng Ninh are a 34-year-old man and a 31-year-old woman, both from Đông Triều Town. They are being treated at the Việt Nam-Sweden Hospital in Uông Bí City.

The patient in the Central Highlands province of Gia Lai is a 32-year-old man who had contact with three positive cases confirmed earlier. He is being treated at the local health centre of Ayun Pa Town.

The Steering Committee for Disease Prevention and Control on Thursday night also reported 51 patients declared recovered, including 22 in Hải Dương who were put in quarantine on January 28.

The country’s caseload has reached 2,140, with 1,531 patients having recovered from the disease.