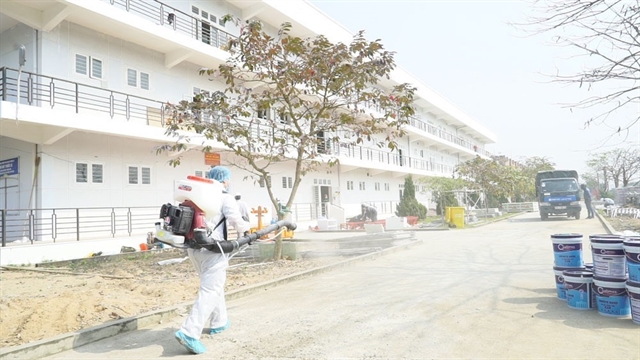 Field hospital for COVID-19 treatment in the northern province of Hải Dương, which has since January 27 recorded over 300 community cases. — VNA/VNS Photo

Six cases – No.2,054 to 2,059 – recorded in the northern province of Hải Dương are cases related to the Chí Linh City outbreak in the province and were quarantined days earlier. Their third COVID-19 tests came back positive on February 8.

They are currently being treated at the Chí Linh City medical centre, Hải Dương.

Patient No.2,060 in Hà Nội is a 38-year-old man, connected to the outbreak in Lai Cách District, Hải Dương Province. He is being treated at National Hospital for Tropical Diseases in Hà Nội.

Another patient in Hà Nội, Patient No.2,064, a 73-year-old man, is a close contact of another confirmed patient, and has been quarantined since January 30. His second test came back positive on Tuesday.

Two cases reported in the northern province of Hưng Yên – a 69-year-old woman and a 38-year-old woman in Yên Mỹ District – are close contacts of Patient No.2,060, and their results came back positive on Monday. The two have also been transferred to the National Hospital for Tropical Diseases in Hà Nội for treatment.

They are currently being treated at Củ Chi field hospital.

Patient No.2,069 is a six-year-old girl in Ayun Pa Commune, the Central Highlands province of Gia Lai, who lived in an area that is already on lockdown. She is being treated at the commune medical centre after her second test came back positive on Tuesday.

Since January 27, the date of the first known COVID-19 community case in this latest outbreak, Việt Nam has recorded 483 local infections.

More than 99,800 people across the country are being quarantined.